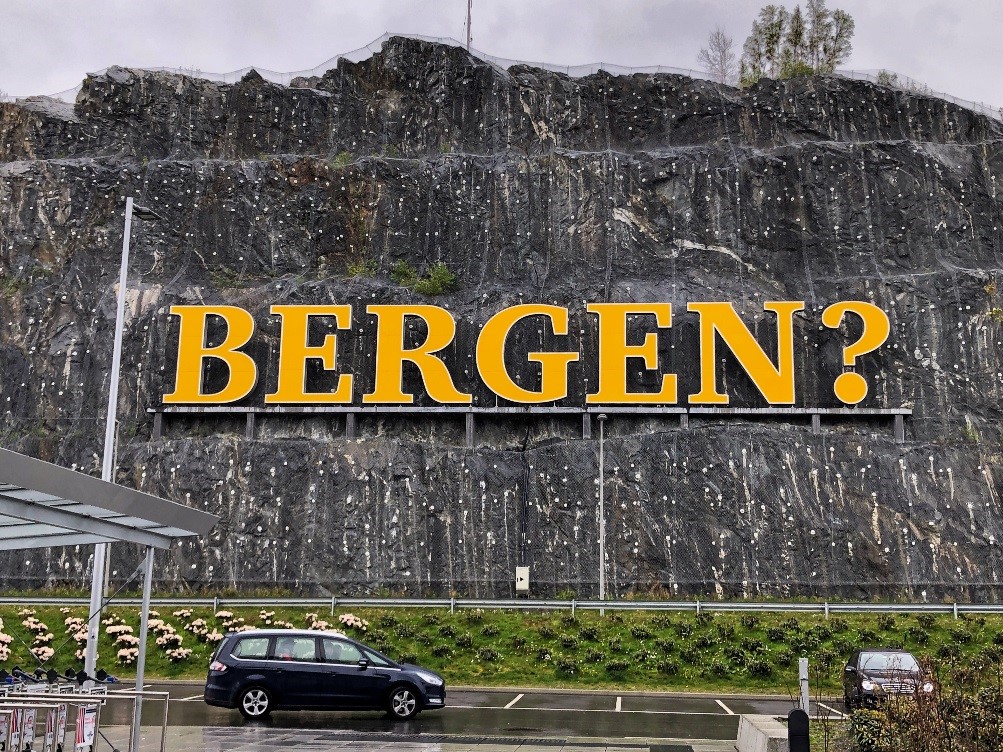 I arrived into Bergen on Loganair’s inaugural flight from Edinburgh; a short but sweet journey that took just over an hour to complete. As we arrived into Norway by air, we were immediately greeted by those picturesque Norwegian vistas: a coastline scattered with islands and snaking fjords, and hillsides peppered with brightly coloured houses. Even with a light covering of mist and the threat of rain, Bergen was determined to be breath-taking.

It took twenty-minutes to arrive at our hotel, the Scandic Ørnen. Set just a little outside of the city’s centre (about ten minutes walking), it was a beautifully modern structure that afforded lovely views of the Fløyen mountain, as well as clean, comfortable, and spacious rooms.

Sue, from Bergen Tour Guides, met us in the lobby to begin our whirlwind tour. Bergen is a charming city on Norway’s southwestern coast, nestled between mountains and the water front, where the UNESCO Bryggen Harbour waits with its famous painted wooden buildings. We crossed the beautiful park, centred by a naturally occurring salt-water lake that once connected to the bay, and meandered down pretty streets lined with more brightly coloured facades. 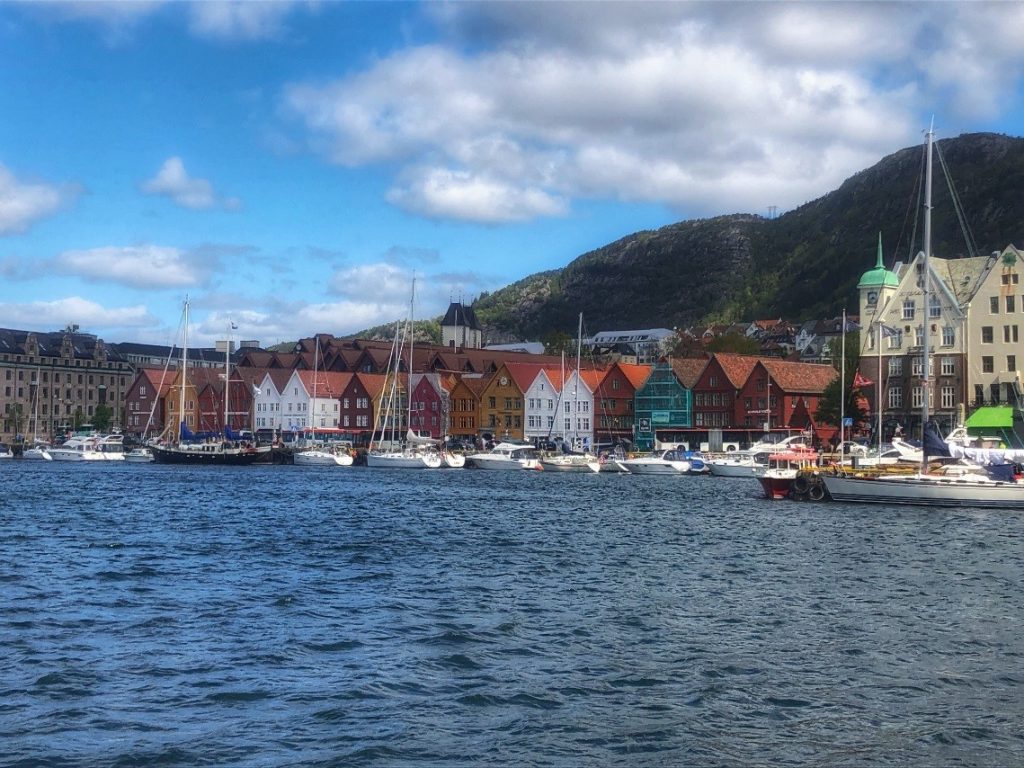 In our tour we learned about Bergen’s extensive history, including its thriving salt-cod trade, its rich musical influences, and the explosion that left the Bryggen Harbour buildings with a slight tilt. 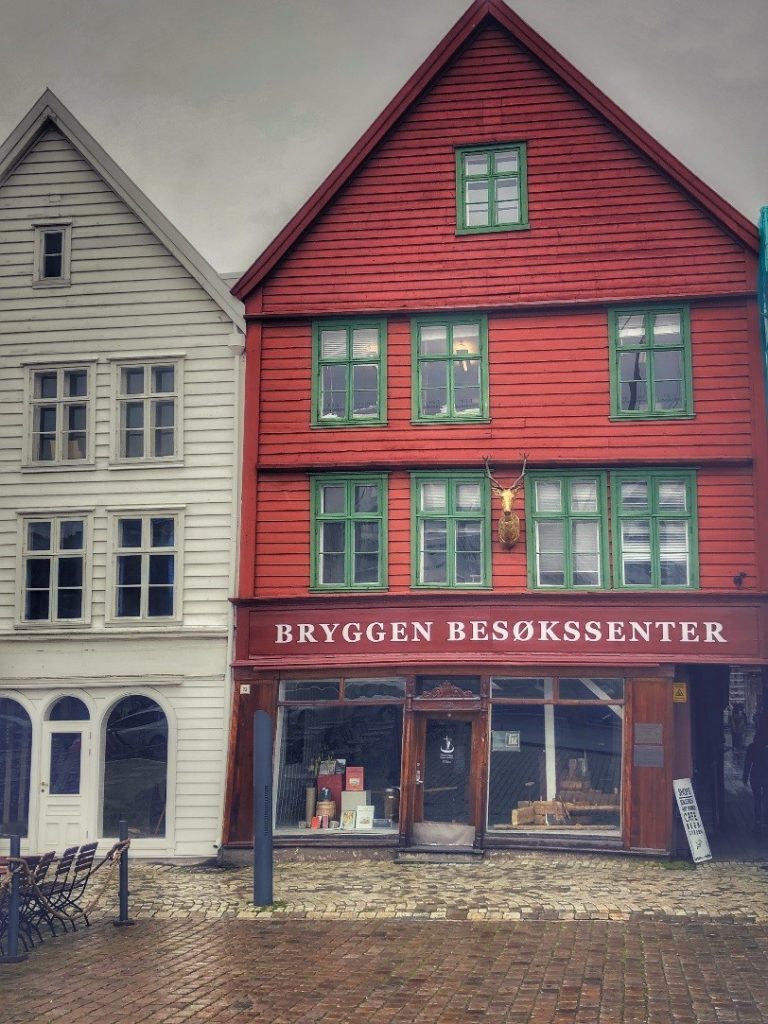 We explored the fish market, admired the surrounding landscapes, and were then promptly whisked away by an awaiting minibus to delve deeper into the life of Edvard Grieg, one of Bergen’s most famous composers. 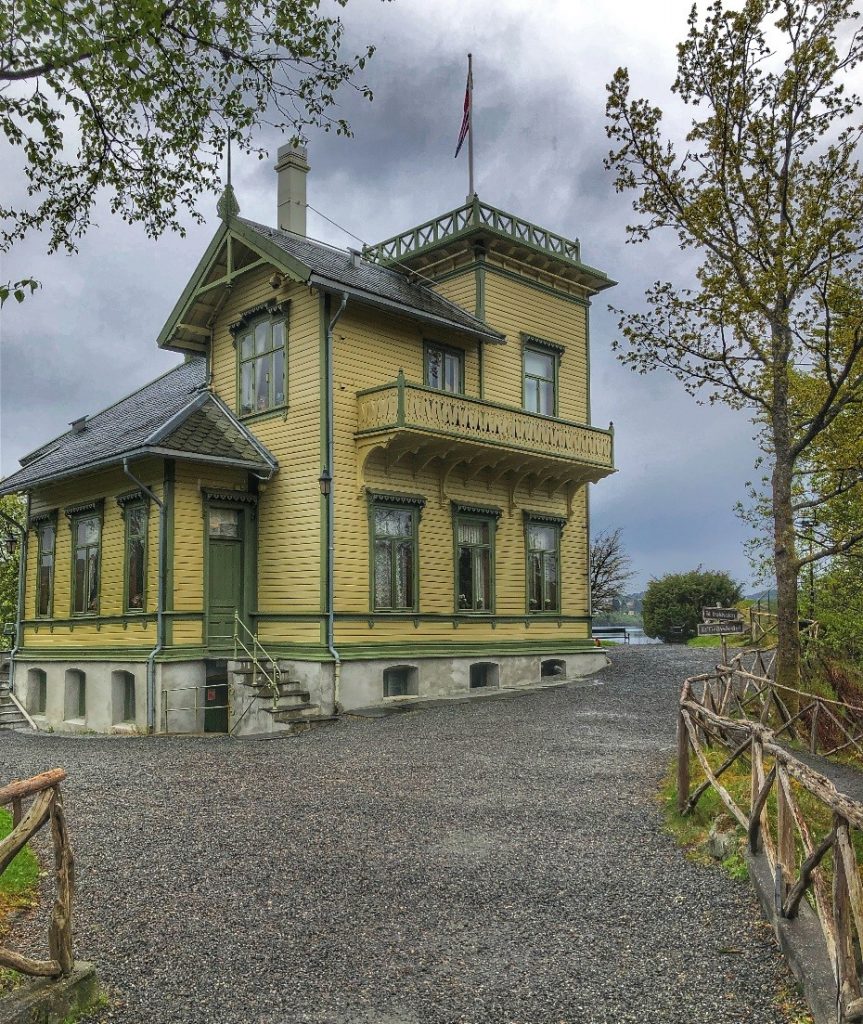 Grieg’s house, Troldhaugen, was just a short drive away. Still retaining all of its original features and charm, the building perches over a stunning lake, a sweet building in the setting sun. After a short visit and exploration of the grounds, we retreated to the visitor centre’s little dining area, where the dining staff presented us with an array of local sea trout and traditional apple cake. 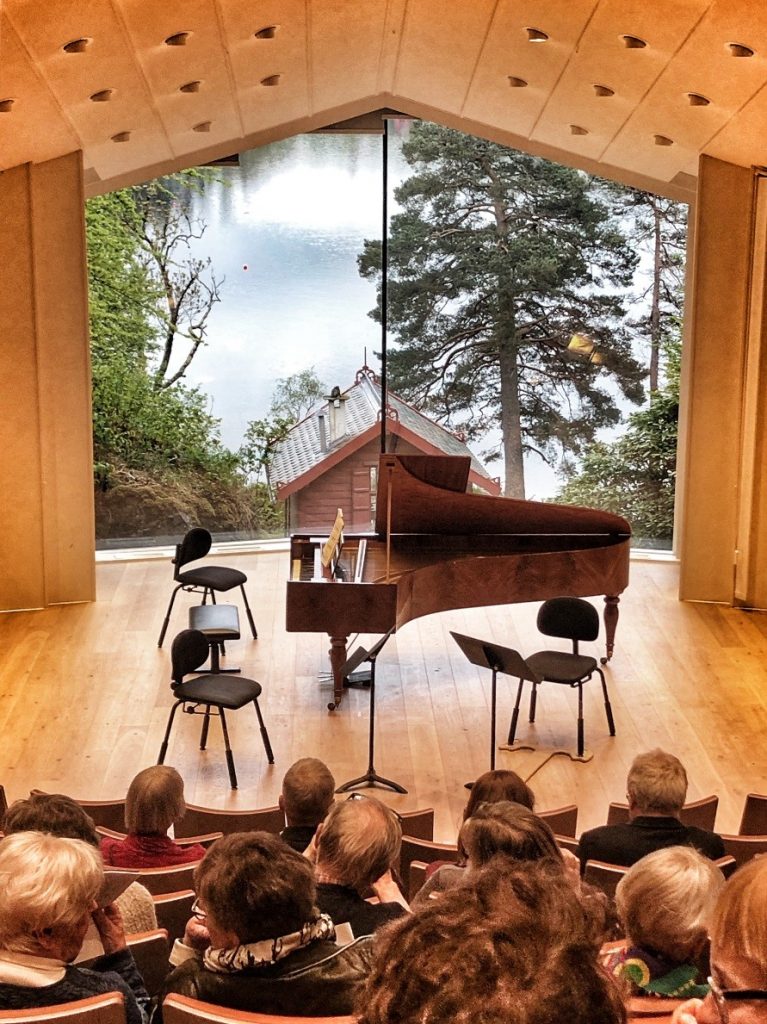 We rounded off our first day with an evening of classical music set in the concert hall which overlooks the little red building that Grieg used when composing his music. It was a beautiful setting to soak up the soothing sounds of the orchestra, and the perfect way to finish our introduction to Bergen.

The next morning we were up bright and early to take part in the ‘Hardangerfjord in a Nutshell’ tour with Kristina from Fjord Norway. This tour was completed entirely on public transport and it really showcased the fantastic ways you can get around this part of Norway. 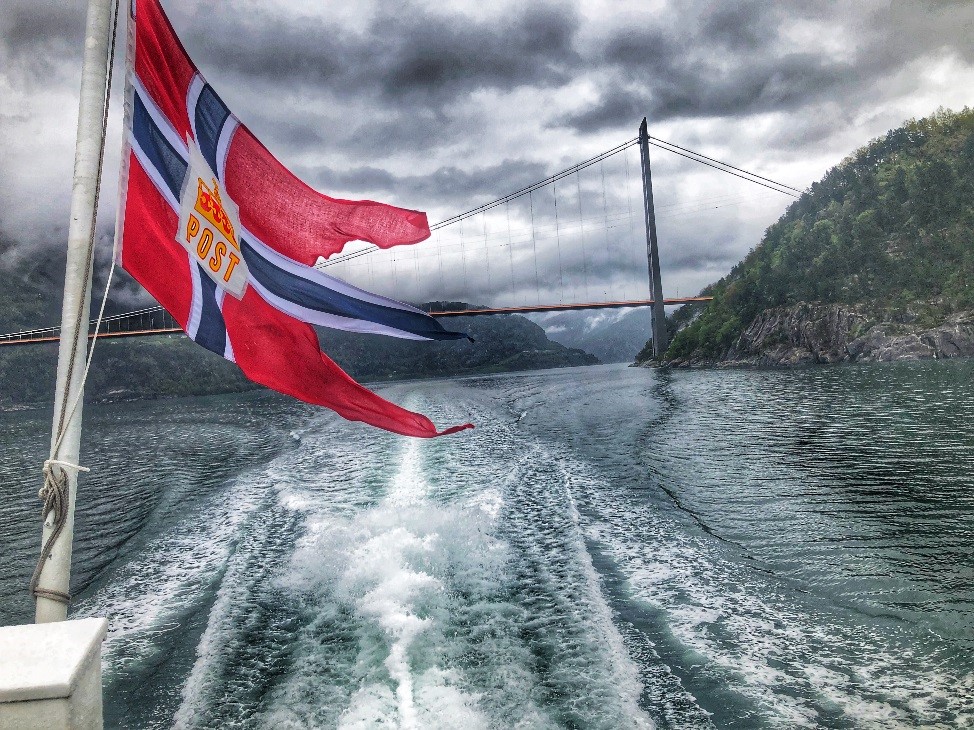 Boat ride on the Hardangerfjord in a Nutshell Tour, Bergen

We began by taking an hour-long train from Bergen to Voss, where we met a bus that wound us through the snaking landscapes, around hairpin turns, to Ulvik to meet our ferry. As there was still a covering of mist over the fjords, we were treated to a truly mythical view of the green waters and the jagged cliffs. Waterfalls sliced through the dramatic landscapes as birds swooped overhead. The nature was so wild and untamed out here that if a Pterodactyl had flown overhead, I wouldn’t have been surprised!

We reached Eidfjord around half an hour later, where we joined a sightseeing tour with Marit through Eidfjord itself. We climbed up into the mountains again, where were had a flying visit at the Norwegian Nature Centre, and a superb two-course lunch of traditional Norwegian fare. We returned to the bus feeling full but ready to tackle the Vøringsfossen Waterfall. 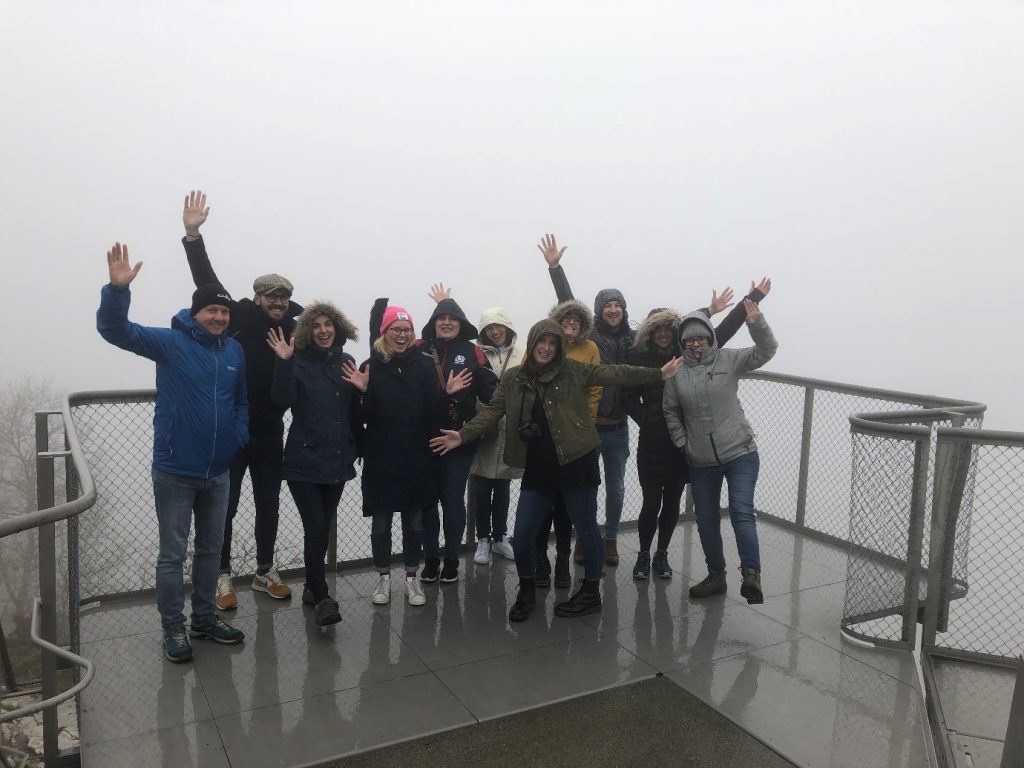 Unfortunately, as the mist was so heavy, we weren’t really able to see anything at all! The ground, 700m above sea level and still dusted with snow, was brisk and refreshing, however, and we were still able to walk along the pathways that took us out over where the waterfall lay hidden. We even managed a very sneaky peek at the Vøringsfossen, but I suppose I’ll just have to come back again to see it in its full glory! 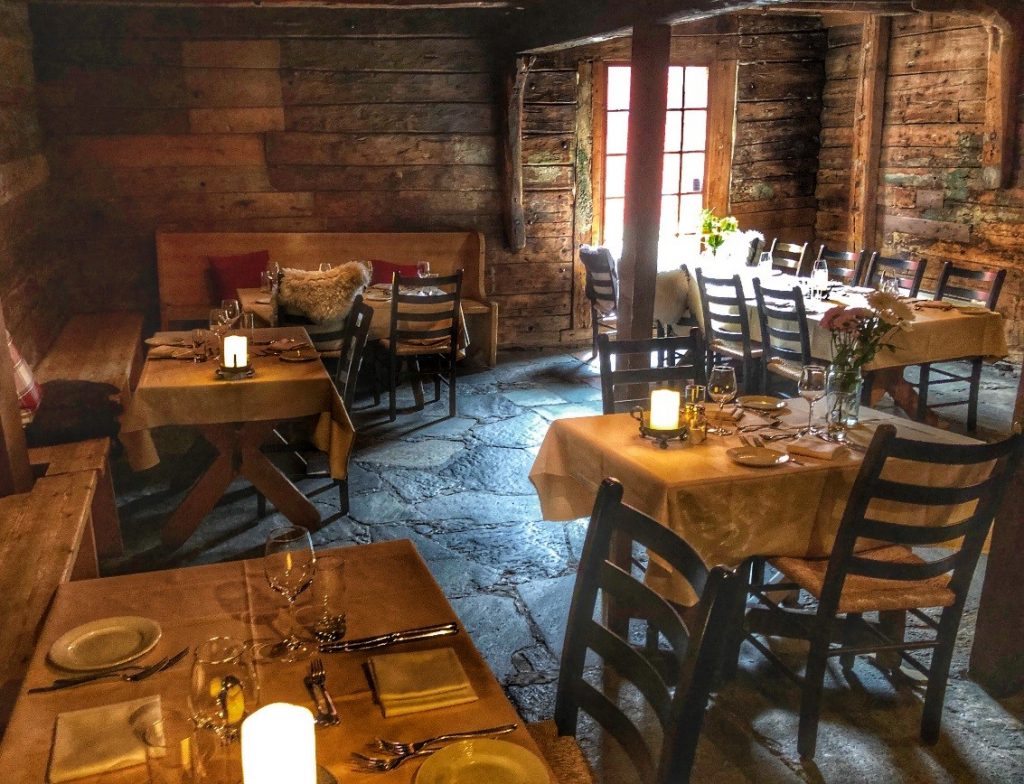 From Vøringsfossen we returned to Edifjord, where another boat was waiting to take us to Norheimsund. This journey, lasting around 3 hours, giving us more time with the fjords themselves, and as we finally reached Norheimsund, we were blessed with a burst of sunlight. This sun chased us back to Bergen on the bus, keeping us company even after we quickly changed for dinner and headed back into town. We ate at Bergen’s oldest restaurant, Bryggen Tracteursted. This hidden gem is tucked away behind the facades of the Bryggen Harbour, and it was once the only building in these rows where fires could be lit. As the wooden frameworks were susceptible to burning down—and often did—these buildings at the rear became the central meeting points for the working men, where they could socialise, cook and eat, and warm up during the long winters.

Again we were blessed with typical Norwegian fare—specifically dishes including the cod which Bergen is famous for. We enjoyed a starter of creamy fish soup, followed by the traditional Persetorsk (a sugar and salted cod fillet, served with glad carrots, potatoes and egg butter). We finished with Sherryfromasj, a traditional sherry and cream cheese desert, dotted with fruit and a sweet ginger biscuit. I would highly recommend a visit to Bryggen Tracteusted, the food is wonderful and the staff are charming, all ready to share stories from the local area. 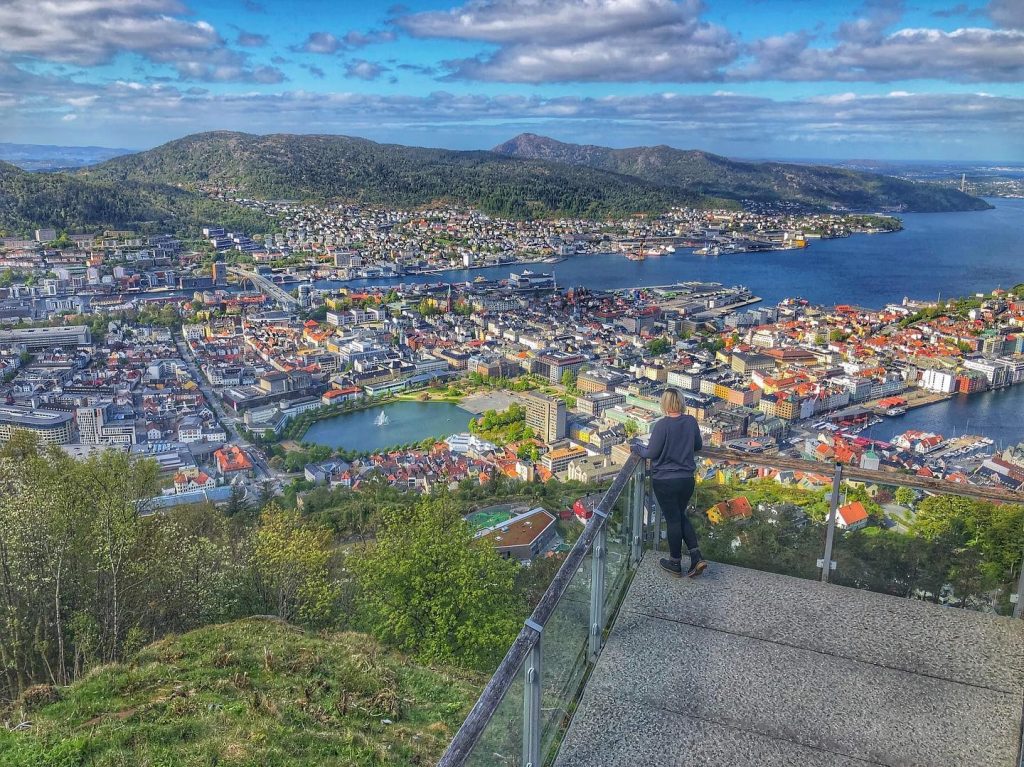 Day three took us to Bergen’s most popular attraction, the Fløibanen funicular railway. This train makes a steep climb to the top of Fløyen Mountain. With the most breath taking views of Bergen and its surroundings, even the sun had finally come out to stay! I could have remained there for hours, just soaking up the peaceful views. 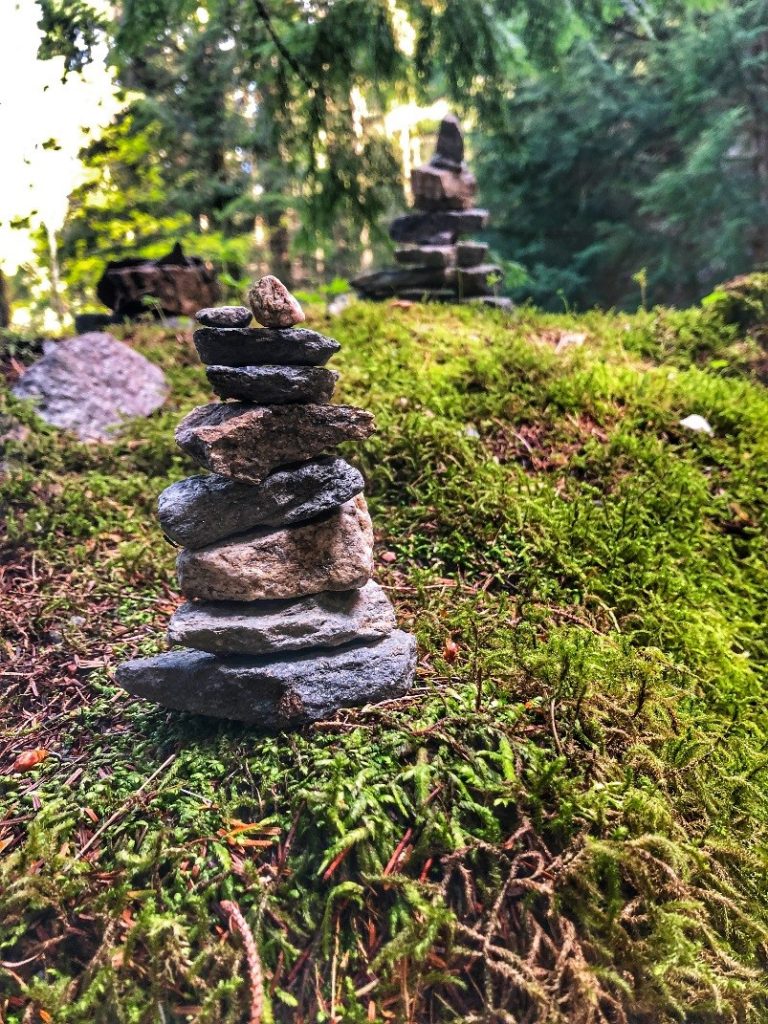 Fløyen Mountain is actually a great place for a family visit. Alongside the railway to get there, there are criss-crossing mountain trails that are home to many cheeky trolls and fairy gardens, and it’s only a 40 minute downhill walk to get you back to Bergen city itself. There are mountain goats resting in the sunshine, playparks with slides and obstacle courses to keep children—and adults—of all ages entertained. You can also take the funicular rail back down to the city if you’d prefer, though we definitely enjoyed spotting all of the local mythology on our walk through the trees. 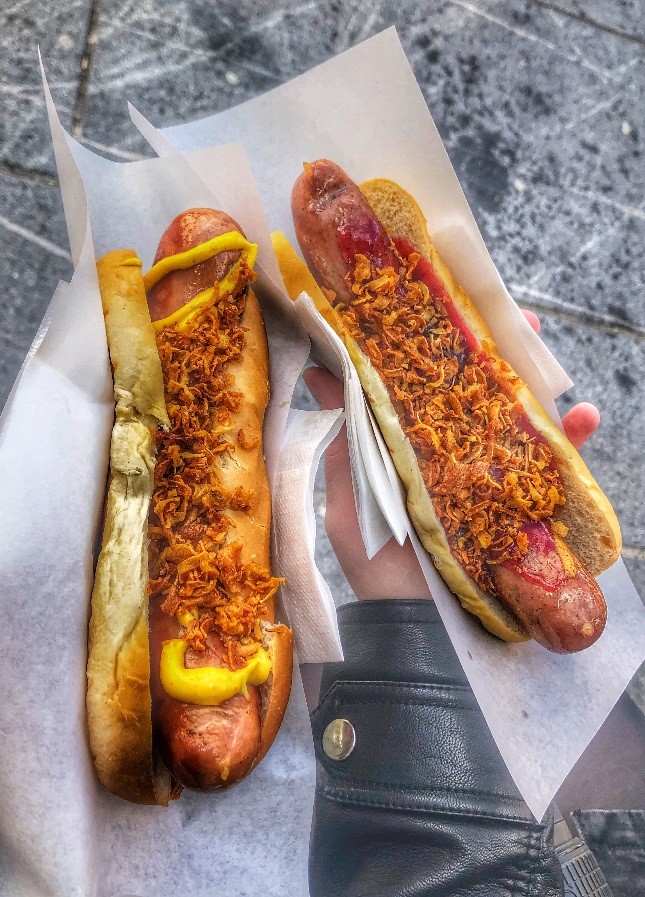 We used the last few hours to really put in the miles around Bergen’s streets. There was a local farmers’ market, where we were able to sample many local delicacies, including brunost (brown cheese), which is a staple in any Norwegian household. We even visited Trekroneren, a small booth in the town’s centre, where the specialty is a Reindeer hot dog. Though I only braved a traditional sausage, one of the group grabbed one with all of the traditional toppings — lingonberry jam, mustard, and crispy onions. She let me try a bite, and it was delicious, the kind of treat you’d expect at a food stand at a Christmas market.

We finished off our time in Bergen at Bien Basar, a trendy tapas restaurant that offers traditional and modern twists on Norwegian food. We sampled plates of asparagus with Parmesan mayonnaise, cured leg of lamb, Spanish ham, potato salad loaded, and, you guessed it, more fish! Each dish was unique and delicious, we left no food behind.

Sad to say goodbye, we took the speedy local bus from the central bus station back to the airport. This journey took just 20 minutes, and was an extremely comfortable ride! Our Loganair flight was waiting to take us home, and just another hour in the air brought us back to sunny Scotland. Seeing Scotland from the air really brought home how similar Scotland and Norway are as destinations, and helped to lessen the pain of leaving Bergen behind.